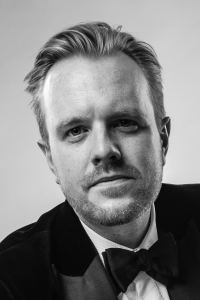 Tolomeo, Karlsruhe International Handel Festival
“The Australian baritone Morgan Pearse as Araspe, the only real male voice, impressively portrays the ruler's lust for power, the frustration of the rejected lover and the macho's jealousy of his rival. He can be really angry, mad and angry. His beautifully timbred baritone has great dramatic potential, an ideal Figaro.” [translation]
Obens, Das Opernmagazin, 2022

“The title role was sung by rising baritone Morgan Pearse, last heard by - and impressing - me in Handel's Tolomeo in Karlsruhe just before the plague curtain fell. In his famous 'Largo al factotum', he carried the day with resonant tone, excellent timing and accurate passage work.”
Bowdler, Bachtrack, 2021

“There remains the most fascinating of the cast: the brilliant bass-baritone Morgan Pearse who knew how to elevate a minor role to the rank of major role. With only 3 arias (one per act), it aroused emotion and admiration thanks to a staggering expressiveness, a poise and a flawless technique and above all a solid and well-timbred voice!” [translation]
Ruggero, Baroque News, 2020

Originally from Sydney, baritone Morgan Pearse made his English National Opera début in the 2015-16 season singing Figaro in The Barber of Seville. He has since returned to sing the role for ENO as well as for New Zealand Opera and State Opera South Australia.

Morgan's further successes in opera include Figaro in The Marriage of Figaro for Zürich Opera, Farasmane in Radamisto with Philharmonia Baroque, San Francisco, the title role in Don Giovanni at the Verbier Festival Academy, Araspe in Tolomeo and Valens in Theodora in the Karlsruhe Händelfestspiele, the title role in Le nozze di Figaro and Papageno in Die Zauberflöte for the Badisches Staatstheater, covering the title role in Billy Budd for the Bolshoi Theatre, Sid in Albert Herring for the Buxton Festival, Nero in Kaiser's Octavia for the Innsbruck Festival of Early Music, Figaro in The Ghosts of Versailles for Wolf Trap Opera, Pompeo in Benvenuto Cellini for English National Opera, Minos in Arianna in Creta and the title role in Imeneo for the London Handel Festival, the world première of Underground Man in Notes from Underground and Owen in Owen Wingrave for Sydney Chamber Opera, Apollo in L'Orfeo on a national tour with the Australian Brandenburg Orchestra, and principal baritone in Dioclesian with Pinchgut Opera.

Morgan was the winner of the prestigious Cesti Competition in 2016, the Lies Askonas prize in 2014, the gold medallist in the Royal Overseas League's music competition in 2013, and a member of the renowned Houston Grand Opera studio programme during the 2014-15 season. He has also won the John Warner Recital Competition, the RCM's Schumann Competition, is a Samling Artist, and an awardee from the Australian Music Foundation, the Tate Foundation, the Cook Society and the Josephine Baker Trust, and was a soloist on the 2021 Gramophone award-winning Dussek album released by the Academy of Ancient Music.

Morgan Pearse is managed by Graham Pushee: graham@artsmanagement.com.au
June 2022
This biography is for general information purposes only and not for publication.
Please contact Arts Management for an up-to-date biography to suit your needs.