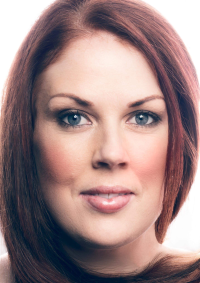 “…soprano Anna Leese made a particularly notable impression… Her entry in the Recordare, to mention just one example, was breathtakingly beautiful as well as heartmelting in its prayerful pleading quality.”

Capriccio, Orchestra Wellington
“And what singing Anna Leese gave us… the glorious outpouring of vocal splendour... Never did Strauss' opulent orchestra overpower her, yet she gave us many unforgettably subtle moments as well.”
John Button, Dominion Post Wellington, 18 July 2016

"Vocally vivid, [Anna Leese as Musetta] ...turned Act II into a mad scene, and stopped the show with her famous aria Quando m'en vo. I found myself wishing Puccini had given her more to do."

"...the sheer vocal presence of Anna Leese's fine soprano provided an element of theatricality that might have surprised even Mendelssohn."

New Zealand Soprano Anna Leese completed a Bachelor of Music degree with First Class Honours at the University of Otago. Anna is the recipient of an impressive number of Australasian awards and prizes, including the Royal Overseas League Vocal competition (being named best overseas competitor in the same competition) and the Richard Tauber Prize as well as the Maggie Teyte and Sybil Tutton awards.  Anna has also represented New Zealand in the Cardiff Singer of the World competition.

Anna made her debut at the 2006 BBC Proms in an all-Mozart programme with the Scottish Chamber Orchestra and Sir Roger Norrington, and has appeared in a number of opera gala concerts with Jose Carreras. Further concert engagements have included Mahler 2nd Symphony with Bernard Haitink (RCM Benjamin Britten International Opera School), Beethoven 9th Symphony in Madrid with Carlo Rizzi, Elijah with the BBC National Orchestra of Wales, Vaughan Williams’s Sea Symphony with the Malaysian Philharmonic, Mahler 2nd Symphony and Messiah with the New Zealand Symphony Orchestra, the roles of Anna (Nabucco) and Freia (Das Rheingold) in concerts with the Auckland Philharmonia Orchestra and Eckehard Stier, as well as recitals with the Prince Consort at the Wigmore Hall.

Recent engagements include the role of Governess (Turn of the Screw) for New Zealand Opera; Haydn Nelson Mass and Mendelssohn’s Lobgesang (Hymn of Praise):Symphony No. 2 with Auckland Choral Society; Mozart Requiem with Christchurch Symphony Orchestra; returns to Auckland Philharmonia Orchestra for ‘Summer Matinee’ High Priestess in Aida, and “A Baroque Easte;, Micaela in Carmen for Festival Opera in Napier; Mary/Luck in a new work by Ross Harris (libretto by Vincent O’Sullivan), Brass Poppies, for New Zealand Festival in both Wellington and Auckland; Mozart’s Mass in C minor with Bach Musica NZ; Tally Ho! and Vaughan Williams Sea Symphony, both with Dunedin Symphony Orchestra; a tour with ‘Takiri’ for Chamber Music New Zealand; Messiah with the Queensland and Melbourne Symphony Orchestras; a recital at the Arts Festival Dunedin; as well as Anthony Richie’s oratorio Gallipoli to the Somme in London and Oxford with the Parliament Choir and Southbank Sinfonia.

Anna has recorded Elgar’s The Apostles in Canterbury Cathedral with the Canterbury Choral Society, a debut recital disc for EMI with Graham Johnson, a Haydn disc on the Michael Storrs Music label, and ‘Italian Love Songs’ under the Champs Hill label.

Anna Leese is managed by Graham Pushee: graham@artsmanagement.com.au
January 2020
This biography is for general information purposes only and not for publication.
Please contact Arts Management for an up-to-date biography to suit your needs.