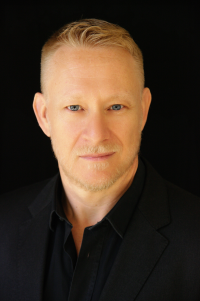 “…Making his role debut as Amfortas, Michael Honeyman showed that his fine King Roger was no flash in the pan. Looking gaunt and pale, he caught the tortured King to a tee, his voice firm and steady, rising effortlessly to the tricky higher notes that bedevil the role…this was a most auspicious reading boding well for a future Wagnerian career.’
Clive Paget, Limelight Magazine, 10 August 2017

In the 2020 – 2021 seasons Michael was heard as Giorgio Germont in La Traviata for Handa Opera on Sydney Harbour, Amonasro (Aida) in Melbourne and as Valentin (Faust) for Opera Australia. He was also to be heard as Duke Alfonso (Lucrezia Borgia), Amonasro in both Sydney and Brisbane and was engaged to cover the four villains in The Tales of Hoffmann, all also for Opera Australia. On the concert platform he was to be heard in Brahms Requiem with the Sydney Symphony Orchestra under David Robertson, Beethoven Symphony No. 9 with the Queensland Symphony Orchestra, under the baton of Simone Young and Mahler Symphony No. 8 with the Melbourne Symphony Orchestra and Sir Andrew Davis in the Margaret Court Arena.

This year his return to Opera Australia will include the role of Sharpless (Madama Butterfly) in the Sydney winter season. Michael will also feature with Opera Queensland in their production of “The Sopranos”.

Since performing his first Verdi role, Amonasro (Aida), for which he subsequently received a Green Room Award nomination for Best Male in a Supporting Role (2013), Michael has now gained a reputation as a specialist in the dramatic baritone roles of Verdi and Puccini.

For Opera Australia Michael’s leading roles include the title role of King Roger in Sydney and Melbourne, for which he received the Green Room Award for Male Lead in an Opera and a nomination for a Helpmann Award for Best Male Performer in an Opera and the title role in Wozzeck (Berg) for which he received a Helpmann Award in the category of Best Male Performer in an Opera in 2019. He has also performed the title role in Simon Boccanegra, Miller (Luisa Miller), Escamillo (Carmen), Ford (Falstaff), Di Luna (Il Trovatore), Sharpless (Madama Butterfly), Donner (Das Rheingold), Sciarrone (Tosca) Ortel (Die Meistersigner von Nürnberg), Amfortas in a concert performance of Parsifal, Amonasro in Aida at Opera on the Beach and at Handa Opera on Sydney Harbour and appeared as a soloist in Opera Australia’s New Year’s Eve Gala.

Michael’s debut with Sydney Symphony Orchestra was as Ned Keene (Peter Grimes) which he also performed for Brisbane Festival. He has also worked with both West Australian Opera and State Opera of South Australia, and performed in Beethoven’s 9th Symphony as part of the 40th birthday celebrations of the Sydney Opera House.

Equally at home on the concert platform, he recently performed Elijah with the Sydney Philharmonia. His concert repertoire also includes Mozart Requiem and Mass in C Minor, Handel Messiah, Rachmaninov Vespers, and recitals for ArtSong Perth and ABC FM radio. In 2013 Michael was presented with the Australian Opera Auditions Committee Dame Joan Sutherland Scholarship, which enabled him to travel to New York, receiving instruction from leading opera conductors, teachers and coaches, associated with The Metropolitan Opera.

Michael Honeyman is managed by Graham Pushee: graham@artsmanagement.com.au
February 2022
This biography is for general information purposes only and not for publication.
Please contact Arts Management for an up-to-date biography to suit your needs.