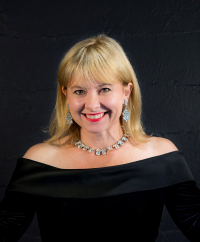 “When the claws come out and Hermia and Helena face off at the end of Act II, Russell gives a wonderfully animated performance as she snarls and claws at her rival and the two men have to carry her off.”

“…mezzo-soprano Sally-Anne Russell, in another pants role, that of Cyrus, the conquering Prince of Persia. Steadfast and full-blooded, she dominated the stage and delivered beautifully ornamented da capo moments”.

The Barber of Seville, Melbourne Opera

“…One aspect of this production that was indisputably in line with Rossini’s intentions was among its highlights: Sally-    Anne Russell’s Rosina. A full, warm tone throughout from bottom to top and neatly executed coloratura passages were invested with a musical ease and lightness of touch essential to the character. Her vivacity and wicked sense of humour also had the power to delight and charm the audience as well as her suitors”.

“Sally-Anne Russell is one of Australia’s current operatic and oratorio stars. She gave the character of Rosina believable determination, and her beautiful mezzo soprano was all that could be desired”.

“Mezzo-soprano Russell is in delightful form as dear Rosina, conveying the comedy with a twinkle in her eye and singing with a golden, expressive tone”.

“Known as much for her Baroque virtuosity as for her Bel Canto interpretations, Sally-Anne Russell’s fleet coloratura and comic timing make her an ideal Rosina”

"Sally-Anne Russell in a deeply moving performance of Brahms' Alto Rhapsody in which she injected long legato lines with expressive intensity and lovely dramatic colour. She exhibits a striking presence on stage that matches the authority of her performance".

One of Australia’s finest mezzo sopranos, Sally-Anne Russell has over sixty operatic roles in her repertoire and has sung in fifteen countries including the United States, Austria, The Netherlands, United Kingdom, Italy, Germany, New Zealand, Japan and Canada. As a principal guest artist, she has sung with Opera Australia, all the State Opera companies and all of the major Australian symphony orchestras. Sally-Anne’s many CDs and DVDs include her solo operatic disc Enchanting, Pergolesi’s Stabat Mater (winner of the 2005 ARIA Listeners Choice), Bach Arias and Duets (ARIA Nominated), Mozart’s Requiem, Don John Of Austria, Top 100 ABC Concert Gala, Opera Australia’s Golden Jubilee/50th Anniversary DVD (ABC Classics), Prokofiev’s Love for Three Oranges (CHANDOS) and The No 1 Classical Album 2007 and 2009 (DECCA).

This year Sally-Anne will perform Hermia in Adelaide Festival’s production of Britten’s A Midsummer Night’s Dream; Song of the Earth at the Canberra International Music Festival; Tchaikovsky, Angel of music (Ross) with Royal Melbourne Philharmonic Society; Beethoven Symphony No. 9 with Auckland Philharmonia Orchestra and Messiah with Melbourne Symphony. 2020 saw Sally-Anne return to the Organs of the Ballarat Goldfields Festival for the St. Mark Passion and a recital. She was also scheduled to perform with Melbourne Bach Choir for St. John Passion, Hobart Festival of Voices for Rossini’s Petite Messe Solennelle, Adelaide Symphony for Beethoven Symphony No. 9, the role of Micah (Samson) for the St George’s Cathedral, Perth concert series and feature as a guest artist with The Song Company, in a special project titled “Arms of Love”.

Sally-Anne’s recent engagements include Melbourne Symphony and New Zealand Symphony Orchestra for Messiah, Bruckner Mass in D minor with Auckland Choral Society, St Matthew Passion with the Royal School of Music, at the annual Baroque concerts series Vivaldi in the Vines, Mozart Coronation Mass with Victoria Chorale Tasmanian Symphony for Mozart Requiem and arias, Artsong Perth for a recital with Sarah Macliver, Stonnington’s Opera in the Park, Mass in Time of War and Beethoven’s Symphony No. 9  with Monash Academy Orchestra, Mozart’s Litaniae with Sydney Symphony Orchestra, St John Passion with West Australian Symphony Orchestra, St Matthew Passion with Melbourne Bach Choir and B Minor Mass in Ballarat as well as many recitals. She also sang the role of Nancy Tang in Nixon In China for New Zealand Festival and performed in Voyage to the Moon, a baroque pastiche written and directed by Michael Gow, for Musica Viva and Victorian Opera, for which she received a Helpmann Award Nomination as Best Female Performer in a Supporting Role in opera.

A graduate of the University of Adelaide with a Bachelor of Music Performance, and former member of the Victoria State Opera Young Artist Program Sally-Anne has won many prizes and awards at competitions including the Australian Singing Competition, Herald Sun Aria, Covent Garden Scholarship, Adelaide Aria, National Liederfest, Canberra Aria, The Royal Overseas League in London and The Belvedere International Singing Competition in Vienna. She has been nominated for both Young Australian of the Year and Young Achiever of the Year (Arts).

Sally-Anne Russell is managed by Graham Pushee: graham@artsmanagement.com.au
May 2021
This biography is for general information purposes only and not for publication.
Please contact Arts Management for an up-to-date biography to suit your needs.