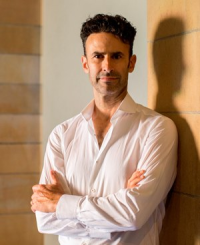 “…the beauteous singing of male alto Tobias Cole…His aria Thou shalt bring them in provided the most splendid singing of the evening.”

“…A major success of the production is the pair of Tobias Cole as Akhnaten and Cherie Boogaart as Queen Nefertiti.  Vocally they are untouchable, Cole’s countertenor being especially pure and effortless…””
Graham Strahle, The Australian, 5 August 2014

“Tobias Cole exchanged his place as musical director for the role of alto soloist and sang with dazzling brilliance in Behold, a Virgin Shall Conceive, continuing to ride the wave of energy provided by the chorus in O Thou that Tellest.”
Jennifer Gall, Canberra Times, 17 December 2013

Tobias Cole, Artistic Director of Handel In The Theatre, is one of Australia’s most successful counter-tenors, having performed throughout Australia, the UK and USA.  He has also been Artistic Director of Canberra Choral Society and Distinguished Artist in Residence at the Australian National University.

An esteemed and vital part of Canberra’s music scene, in the 2019/2020 seasons Tobias returned to the Canberra International Music Festival, Music for Canberra, St. Andrew’s Cathedral, Sydney (Messiah), and to the Bach Akademie Australia. He also made his first foray into the world of music theatre, taking the role of Captain Corcoran in HMS Pinafore for the Hayes Theatre, Sydney. This production also toured New South Wales and the ACT and returned as part of Sydney Festival in January 2021.

After winning the Metropolitan Opera Young Artist Study Award, spending three months studying in New York at The Metropolitan Opera, Tobias made his U.S. debut playing Ottone in (L’Incoronazione di Poppea), returning to sing Apollo in (Death in Venice) and Oberon in (A Midsummer Night’s Dream) all for the Chicago Opera Theater.

Recent engagements have included his return to Canberra Choral Society for the comedic oratorio Not the Messiah, (He’s a Very Naughty Boy) and the Canberra International Music Festival for The Return of Ulysses as well as Israel in Egypt and Bach concerts, the latter repeated in Sydney, with Bach Akademie Australia. He also appeared in an Opera Gala with the Canberra Youth Orchestra, Maniyas, in an ensemble concert of music by Ross Edwards for Kangaroo Valley Arts Festival, in the role of Joacim in Handel In The Theatre’s presentation of Susanna as well as returning to Perth Symphonic Chorus for Messiah.

Tobias’ extensive and very varied performance experience also includes Carmina Burana with West Australian Symphony Orchestra and the Royal Melbourne Philharmonic; Handel’s Esther, and Jeptha: ‘The Vow’ ( in which he sang the role of Hamor as well as directing the production) with Handel In The Theatre, Canberra; Alana Valentine’s Cold Light with The Street Theatre Company; the Lycanthropy Aria from Torsten Rasch’s The Duchess of Malfi with Christchurch Symphony Orchestra; title role in Philip Glass’ Akhnaten for State Opera South Australia; a staged version of St Matthew Passion (Opera Queensland); Didymus in Handel’s Theodora, Lychas in Handel’s Hercules and the title role in the Australian premiere of Handel’s Alexander Balus with Canberra Choral Society; Handel’s Messiah (Canberra Choral Society and Collegium Symphonic Chorus Perth); performances with Sydney Philharmonia Choirs, as guest artist with The Song Company, and at the Australian Festival of Chamber Music, the Woodend Winter Arts Festival and the Canberra International Music Festival.

Tobias Cole is managed by Graham Pushee: graham@artsmanagement.com.au
February 2021
This biography is for general information purposes only and not for publication.
Please contact Arts Management for an up-to-date biography to suit your needs.