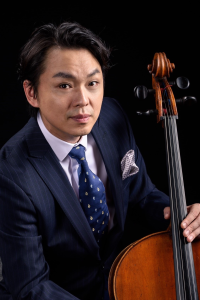 Recital, Melbourne Recital Centre
“Samuel Barber’s Sonata for Cello and Piano: Qin and Chong . . . bringing searing intensity and vivid colours to the work’s bolder statements while adding subtle sensuality to its more romantic utterances . . . Schubert’s Sonata for Arpeggione and Piano in A minor: Qin’s beguiling lyricism and carefully shaped phrasing were a delight throughout . . . the central Adagio was graced with a profound and gentle beauty, counterpointed by the sprightly finale . . . Schumann’s Adagio and Allegro: the duo revel(ed)  both in the ardent romanticism of the Adagio and the cascading energy of the Allegro.”
Tony Way, The Age, February 11, 2022

Tchaikovsky Variations on a Rococo Theme, Auckland Philharmonia Orchestra
“Soloist, Li-Wei Qin deserved all the accolades of a musical premier danseur, injecting character and individuality into his playing down to the last cadenza-like eruption. Instead of the expected Bach encore, a Lamentatio by the contemporary Italian Giovanni Sollima was a welcome surprise. For almost five minutes, the Australian cellist ran the virtuoso gamut, from vocalised lament to furioso outbursts, and held us rapt.”
William Dart, New Zealand Herald, May 2018

“Mr. Qin has a great deal going for him, including a meltingly beautiful tone, flawlessly centered intonation and an ironclad technique”
New York Times

“Li-Wei is the most gifted young cellist I have heard. Aside from an extraordinary technical fluency, he has a musical intelligence and sensitivity which is breathtaking both for its maturity and profound vision”
The Strad

“Li-Wei is an enormously promising cellist…charismatic, generous and committed.”
The Guardian

As one of the most important Chinese Australian cellists, Li-Wei Qin has appeared all over the world as a soloist and as a chamber musician. After achieving great success at the 11th Tchaikovsky International Competition where he was awarded the Silver Medal, Li-Wei has since won the First Prize in the prestigious 2001 Naumburg Competition in New York. “A superbly stylish, raptly intuitive performer” (Gramophone Magazine, January 2015) was the description of the cellist’s Elgar and Walton concerti recording with the London Philharmonic.

In recital and chamber music, Li-Wei is a regular guest at the Wigmore Hall and for the Lincoln Center Chamber Music Society, New York. He has appeared at the BBC Proms, the Rheinghau, the City of London, the Schleswigs-Holstein and the Mecklenburg Festivals. Li-Wei has collaborated with musicians such as Daniel Hope, Nabuko Imai, Misha Maisky, David Finckel, Wu Han, Vladimir Mendelssohn and Peter Frankel among many others.

Li-Wei’s recordings on Universal Music/Decca include the complete Beethoven Sonatas, Works of Rachmaninov with pianist Albert Tiu, Dvořàk Concerto with Singapore Symphony Orchestra and conductor Lan Shui and Elgar/Walton Concerti with the London Philharmonic. Most recently, courtesy of Universal Music, Li-Wei's 2013 live concert with the Shanghai Symphony and Maestro Yu Long has been released on Sony Classical.

Born in Shanghai Li-Wei moved to Australia at the age of 13, before accepting scholarships to study with Ralph Kirshbaum at the Royal Northern College of Music, Manchester and with David Takeno at the Guildhall School of Music and Drama, London. He was invited to join the BBC 'New Generations' scheme in 2001 and in 2002, Li-Wei received the Young Australian of the Year Award. Other major invitations included appearances at both the 2008 Beijing Olympics (New Zealand Symphony), 2012 London Olympics and the Davos World Economics Forum (Basel Symphony Orchestra). Most recently, at the Opening Ceremony of the 2017 Fortune Global Forum, China.

He teaches at the YST Conservatory, Singapore and is guest professor at Shanghai and Central Conservatory of Music, China and visiting professor, Chamber music, at the Royal Northern College of Music. Li-Wei plays a 1780 Joseph Guadagnini cello, generously loaned by Dr and Mrs Wilson Goh.

Li-Wei Qin is managed by Graham Pushee graham@artsmanagement.com
February 2022
This biography is for general information purposes only and not for publication.
Please contact Arts Management for an up-to-date biography to suit your needs.