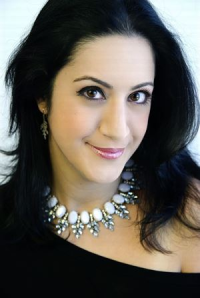 “…The voluptuous voice of Armenian Australian soprano Natalie Aroyan is almost enough to make you wonder whether it is necessary to pay a small fortune to hear Anna Netrebko when we have such talent in Australia. A creamy sound with, in general, a nicely rounded, floating top register, fullness throughout the range, and excellent breath control served Verdi’s intentions well. There was weight of sound that soared above choir and orchestra without the obtrusive vibrato that sometimes accompanies it. The earnest plea at the beginning of the Libera me was only one example of her ability to infuse the text with colour and drama.”

Carmen, Handa Opera on Sydney Harbour
“…Natalie Aroyan sang Michaela with abundant strength and warmth, though was not entirely well served by the amplification in her Act II aria, delivered dramatically from atop a container suspended by a crane high above the stage.”
Peter McCallum, Sydney Morning Herald, March 27, 2017

“…As Mimi, Armenian-Australian Natalie Aroyan​ sang with a voice rich in colour and complexity, creating lines that balanced naturalness with expressive shape.

She has thrilling sounds in the top register and dramatic firmness in the lower notes of the last act. Her characterisation was more of warmth than pallor and she maintained a centred stage presence moulded around the richness of her voice.”

“Natalie Aroyan captured Marguerite’s purity with delightful bubbliness, reaching creamy top notes with ease in the Jewel Song. In a production high on visual effects, her endlessly beautiful soprano … brought the attention back to the music”.
Rosalind Appleby, The West Australian October 30, 2015

“…Chief honours amongst the supporting cast must go to Natalie Aroyan, singing Michaëla………She’s a Moffatt Oxenbould Young Artist who has studied with Freni, Bonynge and Te Kanawa and it shows. Her big aria was winningly sung with excellent diction and clarity, building a more confident character than can sometimes be the case”’.

“…Aroyan’s warm, floating sound is perfect for Mimi’s character, bringing a vulnerable tenderness to the role.  Her Act I solo was a highlight of the night, intensely expressive and heartfelt yet never losing its tonal beauty.”

Natalie Aroyan is an Armenian-Australian Soprano. She holds a Postgraduate Diploma of Opera from the Sydney Conservatorium of Music and a double-degree in Business and I.T. from the Australian Catholic University, Sydney.

In 2022 Natalie’s engagements for Opera Australia will include her debuts as Rachel (La Juive) and Elena (Mefistofele in concert) She will also the reprise the role of Odabella (Attila) and cover Desdemona (Otello).  In June she returns to the Queensland Symphony Orchestra for their opera gala concerts.

Natalie was awarded first place in both The Opera Foundation New York Competition and the Herald Sun Aria Competition. She participated in the International Institute of Vocal Arts program in Tel Aviv, then commenced her Professional Studies Diploma at Mannes College, New York studying with Soprano, Ruth Falcon, where she performed the role of Fiordiligi (Così fan tutte), Annina (The Saint of Bleecker Street) and Alice Ford (Falstaff) conducted by Maestro Joseph Colaneri.

As well as attending the “Solti Te Kanawa Accademia” program in Tuscany, Italy, where she worked with both Maestro Richard Bonynge and Dame Kiri Te Kanawa, Natalie has worked with Maestra Renata Scotto in her Tampa Masterclass and participated in The American Institute of Music (AIMS) program in Graz, Austria, where she won first place and was also awarded the audience vote in the 49th Meistersinger Competition Finals.

On her return to Australia she was awarded first place in The Italian Opera Foundation competition, which enabled her to spend a year in Italy studying with soprano, Mirella Freni in her studio at the Accademia of Bel Canto in Modena, Italy. Following this Natalie was invited as a Guest Artist to cover the title role of Gluck’s Armide for the joint Lindemann / Juilliard Production in New York, USA.

Natalie has been a principal artist with Opera Australia since 2013, where her roles have included Elvira (Ernani), Mimì (La Bohème), Desdemona (Otello), Micaëla (Carmen), Amelia Grimaldi (Simon Boccanegra). Eva (Meistersinger von Nurnberg) and the title role of Aida (Aida).  She has also performed the roles of Mimì (La Bohème), and Marguerite (Faust) for West Australian Opera, Micaëla (Carmen) for Sugi Opera Company, Korea, Mimi (La Bohème) for Hanoi Opera, Vietnam and created, directed and performed the classically theatrical event “An Armenian Journey” at The Concourse, Chatswood, to mark the 100th Anniversary of the Armenian Genocide.

Natalie has performed in both Opera Australia’s New Year’s Eve programs: Mimì (La Bohème) and as a soloist in the Gala Concerts at the Sydney Opera House.  Her outdoor engagements for Opera Australia include the role of Micaëla in Carmen for Handa Opera on the Harbour, the title role in Aida on the Beach in the Gold Coast, Mazda Opera in the Sydney Myer Music Bowl in Melbourne, Opera in the Domain in Sydney and in 2019 she made her debut in the Opera Gala Concert ‘The Field of Lights’ at Uluru. She has also appeared in concert performances of the Great Opera Hits and the OA Salon series.

In 2019 Natalie was nominated for the Helpmann Award for Best Female Performer in a Supporting Role in an Opera for her role in Eva (Die Meistersinger von Nurnberg), and she was awarded the Harding Miller Foundation Opera Scholarship.

Recent engagements have included her debut in Italy, in the roles of Amelia Grimaldi (Simon Boccanegra) at the Petruzelli Teatro di Bari and in the title role of Aida (Aida) at the Teatro G. Verdi di Busseto, during the Verdi Festival.

Natalie Aroyan is managed by Graham Pushee: graham@artsmanagement.com.au
February 2022
This biography is for general information purposes only and not for publication.
Please contact Arts Management for an up-to-date biography to suit your needs.