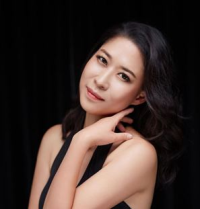 “...Hye Seoung Kwon (Mariana Hong) does grow over the evening towards the tear-jerking finale. There is also a lot of detail in her facial expressions so that we really sense her confusion as Sharpless utters the unknown word ‘ornothology’ (the production employs Amanda Holden’s English translation); pride as she points out that American marriage lasts forever, and excitement as she repeatedly interrupts Sharpless’ attempts to read her the letter. Her voice is strong and vibrant, and she delivers a stirring performance of ‘Un bel dì’.

“…The slender and beautiful Kwon (Hong) turned out to be touching in every way. Her voice is beautifully placed and lit through with grace and intelligence.”

“ …Hye Seoung Kwon(Mariana Hong) as the tragic slave, Liù, provided the most touching moments with precision and colour softened by warmth.”

Mariana graduated from Seoul’s Han-Yang University with a Bachelor of Vocal Music, and obtained a diploma in opera performance with high distinction at the Conservatorium of Milan and the Vercelli Academy in Italy. Under the baton of Maestro Riccardo Chailly and Romano Gandolfi, she performed in concerts in Milan and throughout Italy in Rossini’s Petite Messe Solenelle, Poulenc’s Gloria, Beethoven’s Ninth Symphony and Rossini’s Stabat Mater.

Mariana’s 2020 engagements were to include returning to Opera Australia in the new production of Wagner’s Ring Cycle in Brisbane, to perform the roles of Freia in Das Rheingold and Helmwige in Die Walküre and to Sydney Philharmonia Choirs for Verdi’s Requiem. These performances and Mariana’s engagement in the roles, have now been rescheduled to 2021.

In 2015 Mariana made her UK debut in the role of Cio-Cio-San in Madama Butterfly for Raymond Gubbay Productions at the Royal Albert Hall in London. Other recent engagements include her returns to Handa Opera on Sydney Harbour as Liu in Turandot, to Opera Queensland in the title role of Madama Butterfly and to Opera Australia for the Melbourne Ring Cycle, as Freia and Helmwige.  Her 2017/2018 engagements included Cio-Cio-San for Opera Australia (also performing in their China tour) and Finnish National Opera, as well as a recital and the Rutter Requiem at the Newcastle Music Festival.

Mariana has been soprano soloist in Carmina Burana with Melbourne Symphony Orchestra, Missa Solemnis with Sydney Philharmonia and Auckland Choral Society, and performed at Opera in the Vineyards and at numerous concerts and recitals in Sydney, Brisbane, Melbourne and Canberra.

Mariana was the winner of the Australian Singing Competition’s prestigious Opera Award and the MBS Young Performers Award in 2002. She was nominated for Helpmann (Micaela) and Greenroom Awards in 2008 and 2009.

Mariana Hong is managed by Graham Pushee: graham@artsmanagement.com.au
February 2021
This biography is for general information purposes only and not for publication.
Please contact Arts Management for an up-to-date biography to suit your needs.