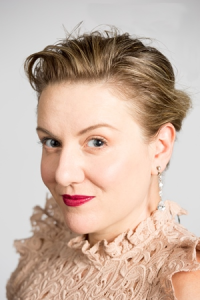 “Vivaldi’s motet for soprano, strings and continuo RV 632 Sum in medio tempestatum,……..The song’s torment, lament and devotion are perfectly illustrated with florid ornamentation and decided articulation by Lazarenko who dazzles with her beauty of tone……….Lazarenko sings with graceful phrasing and her technical grounding enables a ravishing coloratura”.

´…Soprano Celeste Lazarenko projected the expressively smooth yet wide-ranging melody for the Gregorian text in the first movement with even tones in the lower register.  In Judith Wright’s powerful poem The Lost Man in the second movement, she sustained warmth amid melodic stillness.”
Peter McCallum, Sydney Morning Herald, July 2018

“…Celeste Lazarenko who brought a crystal-clear and beautiful limpid tone to the role, effortlessly negotiating the high-lying vocal line; this was some of the finest singing on the opera stage in Australia this year”.
Michael Halliwell, ABR, December 2015

“It is always a joy to hear Celeste Lazarenko, and the role of Léonore gave her ample opportunity to display her awesome purity of tone, combined with a vocal control that can deliver a true pianissimo that can tingle the spines of those in the back row”
Nicholas Routley Australian Stage December 2015

Giasone, Pinchgut Opera, City Recital Hall
“I first saw Celeste Lazarenko in Castor and Pollux, last year’s Pinchgut production, and so already had high expectations. But her performance of Telaire in that opera, though gorgeous, didn’t give much of a hint as to her impressive range of expression. As the vengeful Medea she modulates through lust to terrible artificial sweetness to blazing hate in a way which, supported always by the music, held the audience spellbound. Her vocal technique is truly remarkable, and I would go to anything she was in."
Nicholas Routley, Australian Stage, December 2013

“...by contract, the sinuous line and pure-toned clarity of soprano Celeste Lazarenko made for a warmly sympatheric Telaire.”

Celeste Lazarenko is a graduate of the Guildhall Opera Course, London, under the vocal tuition of Rudolf Piernay and from the Sydney Conservatorium Opera School.  She has a Masters Degree in Performance from both colleges, and a Bachelor of Visual Arts majoring in Painting from University of Sydney. Celeste has been the recipient of many prizes and awards including the Countess of Munster Award, The Australian Music Foundation Award, The Marten Bequest and was a finalist in the prestigious Kathleen Ferrier Competition at the Wigmore Hall, London, where she was described in the Daily Telegraph (UK) as ‘...the most darkly intense of the lot...Electrifying.’

In 2022 Celeste will return to Sydney Philharmonia Choirs for Bach’s B minor Mass and to Hayllar Music Tours for their chamber music tour, focussing on arias and duets of Mozart.

Over the past two seasons Celeste had been engaged to perform with the Australian Haydn Ensemble, Sydney Philharmonia Choirs for Bach’s St. John Passion and Messiah, Haydn’s Creation at the Canberra International Music Festival and with the Australian Romantic & Classical Orchestra. She was then to have made her role and company debut with New Zealand Opera in the title role of Handel’s Semele.

Celeste has also been heard as Sylviane in Opera Australia’s The Merry Widow, Donna Anna in Don Giovanni, Pamina and Second Lady in The Magic Flute and Susanna in The Marriage of Figaro, all for Opera Australia’s touring productions, and as Kate Pinkerton in Madama Butterfly (Opera Australia’s Handa Opera on Sydney Harbour). She has appeared as “Female Chorus” in The Rape of Lucretia for Victorian Opera at Dark MOFO in Tasmania and also for Sydney Chamber Opera, in Ross Edwards’ Symphony No. 2 with the Sydney Symphony Orchestra, in the title role of The Cunning Little Vixen for Victorian Opera, Mozart Requiem for Royal Melbourne Philharmonic Society, with Sydney Philharmonia Choirs in St Matthew Passion, Israel in Egypt  and Messiah, and with the New Zealand Symphony Orchestra in Messiah.

During the course of her studies at the Guildhall, Celeste appeared in numerous productions in roles such as the Governess from Britten’s Turn of the Screw, Barbarina in the English premiere of The Little Green Swallow by Jonathan Dove, Denis in the premiere of Violet by Roger Scruton, Susanna (Le Nozze di Figaro), Rosina (La Finta Semplice) and Nanetta (Falstaff).

While living in London, Celeste worked with Glyndebourne Chorus and Opera North where she sang the role of Ninfa as well as covering La Musica in L’Orfeo, and the lead role of Elmira in Keiser’s Croesus. She also worked extensively at English National Opera where she covered the title role in Partenope, Nora (Riders to the Sea), the soprano solo (Luonnotar), Clemence (L’Amour de Loin) and Polissena (Radamisto). For English Touring Opera she sang the role of Morgana (Alcina) and for East Sussex Opera Company, Mary in Vaughan Williams’ Hugh the Drover.

Her engagements on the continent included principal soprano in Hydrogen Jukebox by Phillip Glass for Angers Nantes Opera, Celia in Lucio Silla with both Angers Nantes and Opera de Rennes, excerpts from Pamina in Die Zauberflöte in concert forOpera deRennes, The Seasons for Dijon Opera and Sandrina inLa finta giardiniera for Opera de Bauge.

Celeste Lazarenko is managed by Graham Pushee: graham@artsmanagement.com.au
February 2022
This biography is for general information purposes only and not for publication.
Please contact Arts Management for an up-to-date biography to suit your needs.